Every now and again I come across some article arguing that tracking your macros is not a good way to diet. Most of the time, these arguments don’t have much of grounding in… well, any kind of evidence, but I thought I’d take a few minutes to put my two cents in. I’m going to explain why I like tracking, and then address a couple of the most recurrent arguments against it.

I’d like to preface this by saying that I do track my macros; I use Avatar Nutrition (which I’ll review in full at some point) to set my daily goals, and MyFitnessPal to track my intake. Neither system is perfect, but the total effort on my part is pretty low, and it largely allows me to both take control of what I’m doing, and get on with my life. I don’t think that everyone should be tracking, and I don’t think that everyone who tracks, should track all the time. Whether one should track or not depends on one’s own circumstances, relationship with food and so on.

Note that I am not a dietician, a nutritionist, a doctor, and I’m barely even a coach. I’m mostly just a guy who knows a thing or two about science and likes numbers. Take any advice you get from random people on the internet with a huge grain of scepticism.

Why Tracking is (sometimes) Useful

I think that tracking your food intake is one of the most useful things that you can do to take control of your own body. At some stage, almost everyone (especially people who are interested in powerlifting enough to be reading this blog) will want to change either their body weight or the way their body looks; it’s a totally normal and (mostly) healthy thing to do. One of the reasons that tracking is good for this is that is has a built-in adjustment mechanism.

Let me explain. There are literally dozens of ways one could create the caloric deficit required in order to lose weight. Someone who doesn’t really know what they’re doing might start with running twice a week without adjusting their diet at all, another might cut out alcohol, yet another might start WeightWatchers, the Slow-Carb Diet, paleo, or anything else.  The problem with most of these methods is that if you don’t understand how it works, and it stops working, then you’re back to square one. This is part of the reason that people can end up in a continuous loop of “lose a little weight -> plateau -> get frustrated -> regain weight -> get motivated -> lose a little weight”.

Tracking macros can provide a way to break the loop. Understanding how your weight works takes away the mysticism of dieting and allows you to control if yourself. You’re losing weight and don’t want to? Bump up your calories a little. You’re losing weight, but not as fast as you’d like? Cut your calories a little. (WeightWatchers actually gives you something similar, and it’s one of the reasons that I quite like it, as far as organised dieting goes.)

I think there are a lot of psychological benefits to tracking your macros as well. Some diets will make you feel guilty for wanting to eat the “wrong foods” or will prevent you from going out with your friends because the Mexican place down the road doesn’t serve steamed chicken breasts on broccoli. Sure, it can take a little forethought, but it is liberating to essentially be able to eat what you want.

There are some caveats about IIFYM. The first one, I’m going to illustrate using a diagram I borrowed from Renaissance Periodization (if you haven’t, check out their blog and books, they’ve got some of the best evidence-based information around.)

This diagram shows the different components of your diet and their relative contribution to your body composition change and/or performance. By far, the largest two are calorie balance and macronutrients, which purely eating foods which fit your macros will nail. These two don’t tell the whole story, though, only about 80%. There are still some small gains to be had by hitting your nutrient timing, food composition, and supplementation (assuming, of course, you’re actually complying with your diet.) 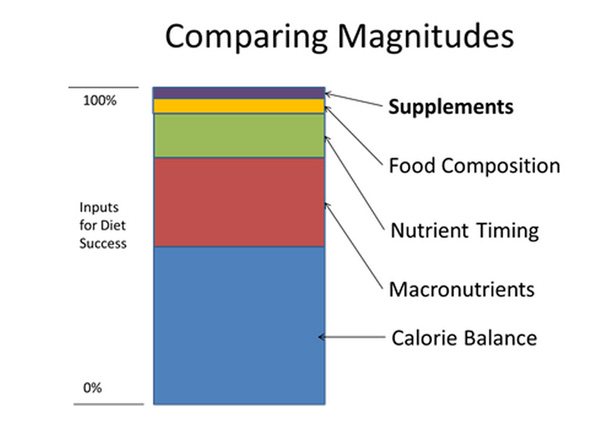 What this means, in real terms, is that if you made up all of your macros just by eating different types of ice-cream, you would be leaving some gains on the table, versus eating a diet which includes a variety of fruits and vegetables, a couple of different protein sources, and healthy fats. You would also be leaving a little on the table if you didn’t space your protein intake out throughout the day, or only ate fats peri-workout.

To be honest, I don’t think that this is a huge problem. While some people who have been dieting a long time might feel inclined to binge on every manner of snack food when they first get given their macros, the truth is that when you eat like that you feel like crap, and you’re going to end up hungry as hell, so people tend not to do it.

I think that IIFYM, paired with some guidelines along the lines of getting enough variety, eating their vegetables, and a little on nutrient timing is the best diet for performance.

There is one last caveat that I’d like to mention. Although in theory, any food can be fit into macros (most of the time), some people struggle with self-control. If you’re the kind of person who can eat either zero cookies or twenty cookies, but not one or two, then it’s probably a good idea to not even try to fit them in. 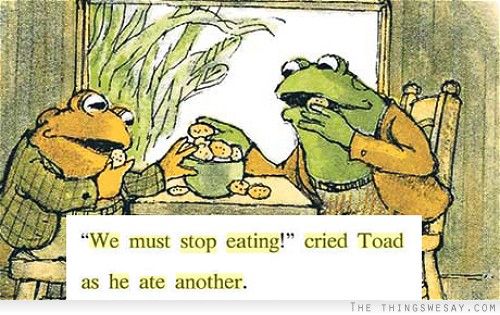 There are a few common arguments against macro-tracking being your main method for controlling your nutrition, some with more merit than others. I’ll address a few of the most common ones here.

“You can’t make gains if all you eat in pop-tarts.”

Well, you’re not wrong. If all you ate was pop-tarts (I couldn’t eat pop-tarts even if I wanted to, they don’t sell them in New Zealand, but whatever) you would have zero fibre in your diet, you’d be seriously lacking in micro-nutrient variety, and you’d be hungry all the time (though your body weight would still change favourably.) The problem with this argument is that it assumes that everyone who tracks their macros eats like an asshole; living off McDonalds and pop-tarts because a gram of carbohydrate is a gram of carbohydrate regardless of where it comes from, but (most) people simply don’t eat like that. Especially if you’re in a caloric deficit, most people are going to chose calorie-sparse foods simply because they’re going to be hungry otherwise. What that means is people eat fewer pop-tarts and burgers, and more oats and vegetables.

This is a bit of a strawman argument. There are far more people who eat a healthful diet by tracking their intake than survive on pop-tarts.

“A calorie isn’t a calorie because…”

There is actually some merit to this one. I’m going to break it down into some sub-categories.

Thermic Effect of Food – To consume energy, you need to burn some energy. This is called the thermic effect of food, and it varies by macronutrient. There is also some variation within macronutrients. While this is true, it’s reasonably consistent and is always less than the calories consumed. The result is that, on average, your thermic effect of food day-to-day doesn’t really vary.

People Poop – Yep. Not every calorie you consume is actually absorbed. Sometimes, you can even massively decrease the transit time of food, which means fewer calories are absorbed by your body. This isn’t a long term thing though, which means, on average, it doesn’t vary enough to be worth considering.

I saw this study where… – The vast majority of literature that I have seen points to a calorie being a calorie. Because of the way statistics is handled by most scientists, one of out every 20 studies where nothing happened, it looks like something happened, so occasionally you will see something to the contrary. In the mean time, the weight of evidence still points to calorie balance being the primary determinant of weight change.

“You’ll need to weight everything for the rest of your life!”

Again, it’s not for everyone, nor for all the time. Maybe you track your macros one day a month just to make sure that you’re on track. Maybe you track your macros just when you want to see a significant change. Maybe, you’re one of those people for which guesstimating everything you eat isn’t a burden, so you can just do it indefinitely. Maybe weighing things just doesn’t work for you at all, and you need to find another way to regulate your body weight. All of those are fine. 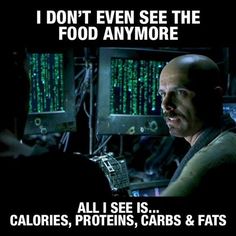 That’s my take on eating according to macronutrient guidelines. Hopefully, if you’ve tracked your macros now or in the past you feel a little vindicated. If you haven’t, and you feel like you’d like to learn more, I’d point you towards the videos Eric Helms did on his nutrition pyramid. Regardless, I’d like to hear what you thought, down below.

See you all soon.

This blog post brought to you by too much coffee, and some smooth, smooth jams by The Notorious B.I.G.